Dan Solomon, a senior fellow in the Leadership in Public Science cluster, knows better than most the long history the cluster carries with it. 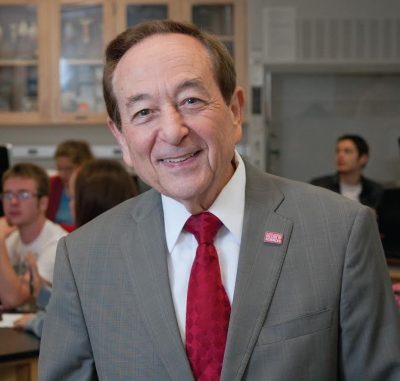 He came to NC State in 1981 as professor and head of the Department of Statistics. He eventually became the dean of the College of Physical and Mathematical Sciences (PAMS) in 2000, and founding dean of the College of Sciences in 2013. Solomon retired in 2015, but was invited to become a senior fellow when the cluster began to take shape.

However, public science at NC State didn’t start when the official cluster faculty were hired in 2016. Indeed, the history of NC State’s engagement with the public dates back to its founding in 1887 as a Land Grant university.

The College created an outreach program for schools, The Science House, in 1991. It later started producing magazines to reach the public, with articles eventually focused on funding citizen science, the future of science, and the visual communication of scientific information. And it began considering ways to create broader interdisciplinary collaborations around science communication.

Then, in 2011, following the arrival of chancellor Randy Woodson, the cluster program (formally called the Chancellor’s Faculty Excellence Program) was developed. The first clusters were proposed and funded in 2011, and hiring for them began the next year.

Soon after, PAMS was replaced by the “larger, more diverse, College of Sciences,” said Solomon. The launch plan for the new college called for “engaging with CHASS and other colleges to develop a proposal for the upcoming second round of cluster hires,” he added.

They sought to create a cluster that focused on the practices of science communication, citizen science, and public engagement, as well as research into these areas.

The Leadership in Public Sciences cluster was proposed and funded in 2015 and has brought the best and the brightest to work with it.

“The cluster has attracted an extraordinary and multidisciplinary set of new faculty to NC State at the junior, mid and senior-levels,” said Solomon.  These faculty are able to share their research with the public through science communication, including by promoting and advancing citizen science. “A powerful way to inform the public is to engage the public in science,” Solomon pointed out.