From GPS-tracking animals all around the globe to making appearances in television shows like, “What on Earth?” and starting a podcast about animal activities, Roland Kays has taken his interest in studying mammals to new scientific heights. Kay’s excitement for the work he is doing is clear. He spends most of his time working on his research, helping students with their research, or communicating his enthusiasm about science to the broader public.

Kays uses remotely activated cameras called camera traps to gather footage of wildlife, even when researchers are not present. According to Kay’s website, “Our camera traps provide scientists a view into the behavior, ecology, and population status of wildlife across the state.” Many of Kay’s camera trappings projects such as eMammal and North Carolina Candid Creatures include citizen scientists.

A new platform that Kays uses to engage the public is through his podcast, “Wild Animals.” Each episode features a different scientist with interesting stories to share about an animal they have studied. Kays recommends giving ‘Hansi- the stork who brought a baby to a farm’ and ‘P22, the mountain lion of Hollywood.’ a listen.

Wild animals aren’t the only types of animals that Kays is interested in studying. NC State Scientist Rob Dunn and Kays are working together with undergraduate students on a project called Cat Tracker. “We track pet cats with GPS tracking devices,” explains Kays. “We want to know where the cats are going and if they are hunting native species; where they are hunting native species.”

Kays and his team have tracked over one hundred animals in North Carolina alone. Further, their project has piqued interest globally. “We got an email from some people in Australia, saying “Hey, we want to do the same thing,” says Roland.

Their cat tracking endeavors have only grown. “We have now tracked 965 cats across six countries with this project,” Roland says. The results of Cat Tracker reveal that cats mostly stay near their homes, sometimes daring to venture over to a neighbor’s house.

Undergraduate students are vital in helping Cat Tracker go on. Kays recognizes the importance of getting the  community excited about science, and he helps his students take the scientific jargon that they are familiar with and turn that into everyday language. “Students that are working on this project are trained in how to talk to the media,” says Kays.

Communicating science to the non-scientific community is just one of the aspects of research projects that are relevant to Kays. “Usually there are three things that I try to incorporate in my projects,” says Kays.
Along with engaging the public, discovery and conservation relevancy are important to Kays when he is formulating projects. “I want to collect data, I want to learn something I’ve never learned before,” says Kays. “Ideally, you want all of these to happen at once, but sometimes it might be two out of three.”

Interested in learning more about Roland Kay’s work? Check out what he is up to on Twitter! 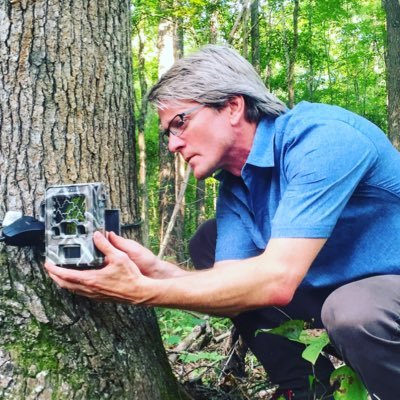 The Microbe that Poops Gold: How Carlos Goller gets Students Involved in Science Extra, Extra..Thumb? Read All About It!